This is a re-post from the CSLDF blog

The Climate Science Legal Defense Fund has launched a series of guides to scientific integrity at nine federal agencies. The guides will help researchers understand their employer’s policy and navigate the process of filing a scientific integrity complaint. They also reveal which agencies have strong policies and where the policies are lacking.

Guides are freely available as a single publication, and individually for the following agencies:

Scientific Integrity Policies at a Glance: Strengths and Weaknesses

The importance of strong agency scientific integrity policies has become clear as science at federal agencies has reached a “crisis point” under the Trump administration. We’ve documented 270 attacks on science by the federal government since November 2016 in the Silencing Science Tracker, our project with the Sabin Center for Climate Change Law. A number of these actions, such as the September 2019 series of events at NOAA known as SharpieGate, are unmistakable violations of agency scientific integrity policies.

We rated the main components of each policy to help scientists understand a policy’s usefulness (see the table on pages four and five of the compilation). A “very good” rating means the policy addresses the topic comprehensively, and the language is tailored to the agency and its scientific work. At the low end of the scale, “not addressed” means the policy is silent on a given topic.

These ratings enabled us to evaluate the strengths and weaknesses of the nine policies. Overall, they suffer from a lack of organization and user-friendliness. So even when a policy addresses an issue, the information may be of limited value to scientists. Many policies merely consolidate information via links to other resources and don’t discuss how the information might form a unified scientific integrity policy.

Below we highlight how the policies deal with crucial aspects of scientific integrity and where they’re lacking. 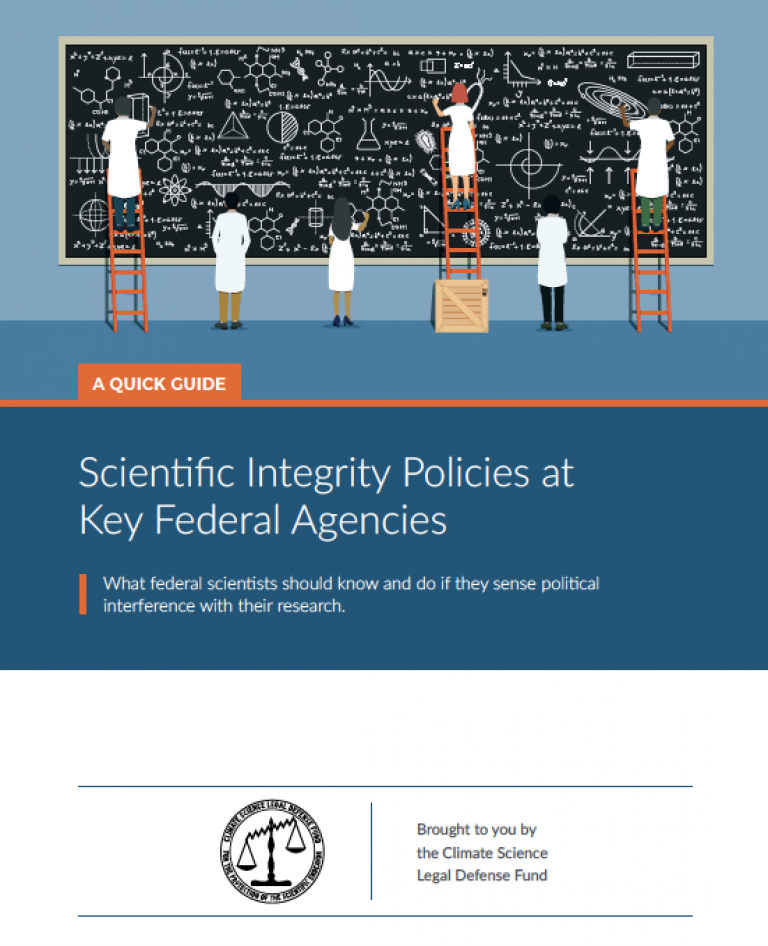 Most agencies have at least some protections for dealing with political interference in research. The NOAA policy is among the best because it explicitly prohibits officials from directing scientists or other NOAA employees to suppress or alter scientific findings. At the other end of the spectrum, the CDC fails to address political interference at all, an unsettling omission given the nature of the agency’s work.

Only the DOE, EPA, and NOAA policies address threats and intimidation to research, which is particularly discouraging in our current political environment.

The nine agencies we reviewed all fall short regarding whistleblower protections. Only the EPA and NASA policies achieved a “good” rating. The other seven agencies received a “fair” grade for mentioning existing protections, although they fail to elaborate further. Given the attitude of the Trump administration toward science and high-profile whistleblowers in the press, this is a concerning omission.

Communication of agency science is a primary focus of many scientific integrity policies. Most policies emphasize making data and results public, while the rights of scientists concerning their communications are less clear. The DOE is the only agency that provides adequate guidance on the use of social media. The DOD and NASA policies don’t mention social media at all; four agencies—the CDC, DOI, EPA, and NSF—address social media in separate documents, but their policies don’t mention that these exist.

Another critical aspect of science communication, the right of scientists to review and correct agency communications, is only addressed by the policies of the DOE, EPA, and NOAA—the remaining six agencies don’t address the topic.

The nine policies reviewed differ the most in their treatment of scientific integrity complaints and how these are addressed. Only three agencies—DOI, NOAA, and the USDA—have detailed complaint procedures in place. Yet the DOI policy falls short on the adjudication process by failing to discuss who adjudicates a claim.

The other six policies fail to describe procedures for investigating claims that scientific integrity was violated. However, of these, most provide links to the relevant regulations on research misconduct investigations. While these regulations provide an overview of the investigation process, it’s not clear whether the procedures apply to claims of scientific integrity violations that fall outside research misconduct, such as political interference or censorship.

How Scientific Integrity Violations are Handled

The policies vary widely in how violations of scientific integrity or research misconduct are handled. Only five of the nine agencies reviewed detail the remedies for violations; the DOD, DOE, DOI, and NOAA are entirely silent, which is a troubling oversight. Knowing what happens when a policy is violated helps clarify the potential severity and enables scientists and other agency employees to understand the importance of maintaining scientific integrity. Describing the remedies also holds the agency accountable to consistent standards.

What Agency Scientists Should Know About Scientific Integrity

Agency scientists should consider familiarity with scientific integrity principles a crucial part of their jobs. These policies can ensure that the work of federal scientists isn’t censored or altered for political reasons and that the science relied on by these agencies for decision-making is free of fraud, fabrication, plagiarism, and other issues.

Even when the policies fail, engaging with the process can establish a record of how and why a policy didn’t provide the protections it should, which can lay the groundwork for stronger protections for scientific integrity.

Write to lawyer@csldf.org to request a free, confidential consultation with a CSLDF attorney.

The states winning the carbon emissions fight may surprise you